This is a rather nice pub in Grantchester. Some of the interior is low-ceiling'd and dimly lit, but there is a nice eating section with bay window seating.

The beer was well-kept - I tried Adnam's Broadside and there were a couple of other hand-pumps available. We arrived at nearly 4pm on a wet Sunday afternoon and were welcomed with beer and sandwiches/chips/jacket potatoes.

Went here to treat my sister who was visiting from Wales in March 2015. The menu is shown in the photograph. 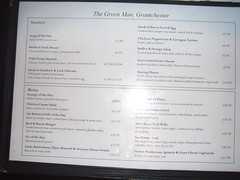 We had the chicken terrine and scotch egg for starters and the quail and the pork belly for mains. We didn't have pudding because the helpings are large enough that it is actually a struggle to finish everything (although we did, because everything was DELICIOUS and very well cooked). 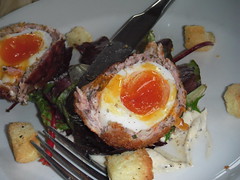 The bar staff and waitress were wonderful, and when we asked the waitress how the apricot chutney that came with the terrine was made, the cook wrote the recipe down for us! Beer was fine and v. twiggy (which is a good thing). 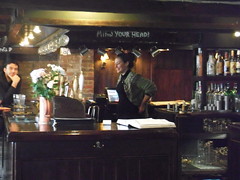 It's often hard to get into this pub at the weekend, especially in spring with the start of walking weather, and this was the first time I've had a full meal inside. I'll definitely be back.